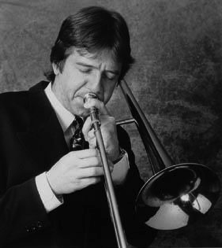 New York jazz trombonist Conrad Herwig has recorded 19 albums as a leader. His newest CD release is The Latin Side of Wayne Shorter on Half Note Records, which was nominated for a Grammy Award in 2009. This is the follow-up project to the 2005 Grammy-nominated CD, Another Kind of Blue: The Latin Side of Miles Davis, and the 1998 Grammy-nominated CD, The Latin Side of John Coltrane. These exciting projects were recorded live at the Blue Note Jazz Club in New York City and feature special guests Eddie Palmieri, Paquito D’Rivera, Dave Valentin and Brian Lynch. His most recent solo recordings on the CrissCross label are A Jones for Bones Tones, Obligation, Land of Shadow, Hieroglyphica, Unseen Universe, Osteology, and Heart of Darkness which received 4 and 1/2 stars in DownBeat Magazine. He has also been voted #1 Jazz Trombonist (TDWR) in the 2002 DownBeat Jazz Critic’s Poll.

Mr. Herwig is an alumnus of North Texas State University in Denton, Texas (where he performed in the One O’Clock Jazz Lab Band), Goddard College in Plainfield, VT, (Bachelor of Arts in Afro-Caribbean ethnomusicology), and Queens College,CUNY, (Master of Arts, Jazz Studies). Herwig  has conducted masterclasses, seminars, and workshops at major universities and conservatories around the world including the Sibelius Academy, Finland; the Royal Irish Academy, Dublin; the University of Koln, Germany; Eastman School of Music, Rochester, NY; the University of Southern California and literally hundreds of others.

Herwig is a recipient of performance and teaching grants from the National Endowment for the Arts. He is currently Professor of Jazz Trombone, Jazz Improvisation, and Jazz Comp/Arr at Rutgers, The State University of New Jersey. Conrad was elected to the Board of Advisors of the International Trombone Association for a second time in 2006.