on Nov. 21, 1968, the Upsilon Phi chapter has upheld the ideals and pursued the goals of Phi Mu Alpha Sinfonia for nearly 50 years. During that time, the chapter has initiated more than 400 members into its proud tradition of brotherhood in music.

To be a Sinfonian at Truman State University is to be part of a vital, vocal and active organization that promotes the art of music. From service initiatives and musical performances to regular appearances by its very own jazz dance band, the Upsilon Phi chapter is active in nearly every facet of musical life on the Truman State campus and maintains a significant presence in Kirksville’s arts community. The active membership includes both vocalists and instrumentalists as well as music majors and non-music majors alike. 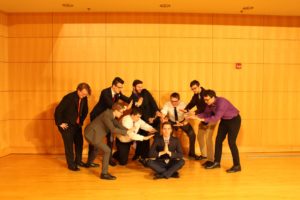 Upsilon Phi has been the recipient of many national and regional awards including the Charles E. Lutton Province Merit Award, which is given to the chapter in each province with the most positive citations in the areas of musical achievement, fraternal tradition, membership development, province interaction, chapter operations, special projects and alumni relations over the previous three years. Upsilon Phi has received this honor the three times it has been awarded in the past nine years.

And since 1968, Upsilon Phi has hosted the annual Phi Mu Alpha Jazz Festival. Traditionally held each February and growing from its original purpose as a high school competition, the festival is now a huge undertaking. Not only is there an all-day competition for high school and middle school jazz combos and ensembles, but a prominent jazz artist is also invited to perform with the Truman State jazz ensembles and to offer clinics and master classes to middle school, high school and university students.

The Upsilon Phi chapter also is privileged to have one of the most beautiful chapter hymns in the fraternity. The piece was written especially for the chapter by Dr. Tom Ritchie.

Weekly business meetings are held on Thursdays at 7:30 p.m. in Ophelia Parrish 2111. The chapter is very open to visits from active and alumni Sinfonians from other chapters. If you would like to visit, feel free to contact us.